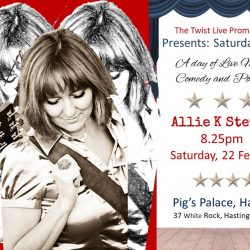 Allie K Stewart will play The Twist Live Promotions event “Saturday Live” at The Palace on 22 February  2020. Join Allie, the Barbarian Horde and other guest performers,  for a dose of Indie Grit Balladry. And if you’re not in town then share the gig with friends. Support independent art and artists! 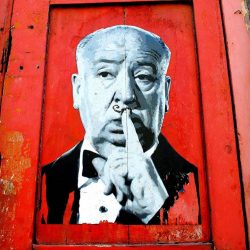 Come along to a wee feature slot tonight 9pm @ the Pig’s Palace in Hastings. After taking time out from performing, I recently felt like dipping my toes in again. The Twist Live Promotions asked me to play a small feature slot at their night – and I was happy to. In these politically challenging, and […] 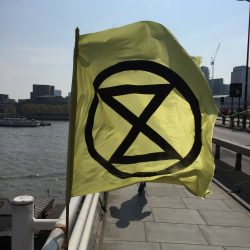 In April I got word of an action by Extinction Rebellion (XR) before it hit London and took over five areas: Piccadilly Circus; Waterloo Bridge; Oxford Circus; Marble Arch and Parliament Square and boy did it cause a stink – quarters of the press to politicians to some members of the public were frothing at […]

Blog – The Feastory of Feast 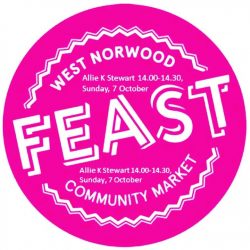 02.07.19 Helloooooooooo, An old acquaintance messaged to ask if I’d like to drop down to the West Norwood Feast in October last year and play a short set. I’m always happy to support community minded, charitable, philanthropic, altruistic, humanitarian and environmental type projects when I can, and said sure. The weather really brought it in […]

15.06.19 – Last year Allie K Stewart shot segments of a new music video for the Breathe music track. Changes to the production schedule meant that the video, originally due to be shot in autumn, went ahead in summer which happened to be one of the hottest periods on record for the UK. This saw […]

Hi Allie, I'd like to hear about your latest news and events!

Make sure this account has posts available on instagram.com.