It was a day long programme – afternoon through to the evening – of music, spoken word, comedians. The turnout was fantastic with Allie K Stewart appearing as the penultimate act at the end of the night.

There were performances from the Spy from Moscow, Amorel Weston and James Merlin – a magician who guessed numbers within envelopes randomly chosen by audience members – and a spoken word act that it took out into the courtyard. The ridiculously hot weather (for England) had many outdoors so there was a great turnout.

Some footage of Allie’s set passed along by a Festivale goer – we hope you enjoy.

What a brilliant evening at Live and Unplugged at the Antenna Cafe. A night fronted by fearless female performers hosted by the Happy Pill Academy  Allie K Stewart was the final act after fantastic performances by Eli, Susie B, Amy Curtis, Leila Williams and Julia Robinson, and you can catch a clip of her performance below.

It was fitting that this female fronted event coincided with Equalitea Parties being held around the UK,  18 June-2 July, celebrating 90 years since the Representation of the People (Equal Franchise) Act.

It’s an unseasonably hot summer’s day in England but this homespun Equalitea Party kicks off in the blaring sun at 2.30pm with marquees at the ready, despite the blustery wind.

I joined one of the many Equaliteas events held around the country, 18 June – 22 July, to honour the heroines and heroes of the suffragette and suffragist movements – who fought for equality and Women’s Right to Vote.  Celebrating the 100th anniversary of the suffragette movement, and the 90th year of the passing of the People Act 1928 which gave women 30 and over (yep there was still work to do) and all men 21 and over (some men were previously excluded), equal right to vote – along with men of 19 and over in the armed forces. 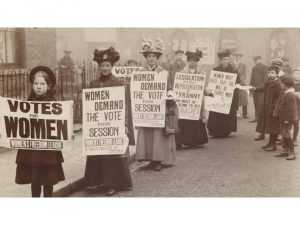 It’s unlike me not to capture fascinating facts like the storyboard of local Croydon suffragettes but I didn’t [*then had to play catch up]. Three I’ve now been introduced to by the extremely obliging Eunice O’Dame are: 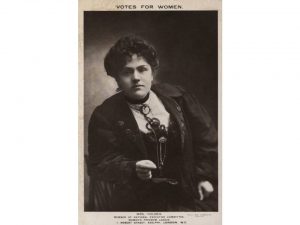 These women have since been followed by Catherine Gowers Kettle – 1961 (Croydon’s First female Mayor), Mary Walker – 1994 (First woman leader of the Council), Sarah Jones – 2017 (first Woman MP for Croydon) and Eunice o’Dame – 2018 (who I mention later).

I was remiss, no pictures at all of the delectable home-made food laid out on fold out tables the length of the hall – wheat-free, vegetarian sausages rolls (yeah I know but they were actually delicious), a variety of cakes and cut sandwiches, and tea of course. So Tea Party… so delightful.  Imagine a light, golden, Victoria Sponge bulging with layers of fresh cream and strawberries – that captured my immediate attention – powdering my top lip with icing sugar. I walked round like that for the rest of the day.  Yep, not a single word from anyone – English sensibilities eh? I’ll never get use to that. I did wonder whether it might’ve been misconstrued for something else!!? 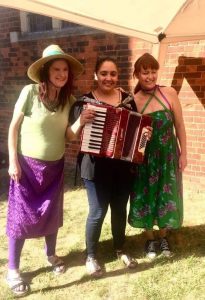 As ever, it was me and last minute wardrobe decisions and with a suffragette theme beckoning I had to think, fast. Apparently, there was more than one colour scheme for the women’s suffrage movement – the more well-known in the UK being purple (denotes the royal blood in the vein of every suffragette), white (purity …of cause I like to think) and green (colour of hope and emblem of spring). Whereas in the U.S. a slight adaption turned white to gold. A quick trip to John Lewis for ribbon which I tied round my neck on the day and et voila, that shit was sorted.

So there were speeches by local politicians and a Mayor, you can imagine, two of whom including the Mayor were women – Yay, taking the baton forward!  I was lucky to meet one of the newest arrivals, the effusive Eunice O’Dame who is the Labour Party’s selected first black, and female, candidate to stand in North Shirley. A massive achievement! Especially when you consider the extra layer of disadvantage women can face with regard to race, ethnicity, religion and sexuality. Intersectionality.

But today, all these women were here making determined strides and keeping the Croydon suffragette spirit alive!

We learned more about a valuable community-led project – which I vowed to remember then promptly forgot the name of, then vowed to find out about – started by Donna Murray-Turner called ‘Another Night of Sisterhood’ (ANOS) to support young people and women, facing social issues like knife crime and exploitation.

Fortunately, the very lovely and talented Alison O’Melia, a local multi-instrumentalist joined me with her accordion on one of my aptly titled songs, “Revolution”. We got together the week before to learn a few tunes from the suffragette period like Rise up Women, Shoulder to Shoulder and Forward Sister Women. 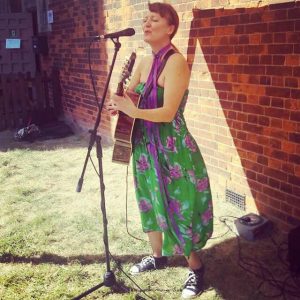 Alison did all the research I have to say.  The songs are a combination of suffragette inspired lyrics – highlighting the cause – sung to well-known tunes of the time. It’s a simple and very effective way of getting everyone on board for a sing-a-long – it’s easy when you know the tune.  So we tried.  Out came the lyrics sheets which I handed around wondering if anyone would join in… and yes they did, and loved it.

[Thanks to Alison O’Melia and Leila Ben-Hassel for pictures, along with Christina Brandenburg, and the Croydon North Labour group – who invited me to perform – credit for your effort, and putting on a lovely event.]

The Gipsy Hill Sessions – Lounge Gig was a great success!  Full to capacity we had a crowd of over forty enthusiastic people supporting the artists. Starting off the night with an open jam with tunes from Pete Bennett, Matt Ibbs and Alison O’Palace.

The programme kicked off with Rebecca Larkin on Comedy duty with her weird and wonderful take on the road handbook, and other life observations – as we followed her down the rabbit hole.  This was followed by Veeraj Lutchman on Indie, Soul, Pop duty with his emotive songs and voice drawing us into his Indie Soul world.  Lastly Allie K Stewart performed her self coined Indie Grit (aka Indie Grit Balladry) for the fantastic crowd giving us the full spectrum of her soulful and diverse style, in songs with raw edge and observational power.

Much veg chilli was eaten and alcohol imbibed – gauging by the aftermath and immense clean up! Friends were made, numbers exchanged, and gigs arranged!

That’s just a little bit of the magic we create in the lovin’ arms of the Gipsy Hill Sessions!

I thought the hard part was done – London to Freiburg.  Over the chalky cliffs of Dover, scooting in and out of France, crossing into Belgium and briefly dipping a toe in Luxembourg before arriving in Germany on a balmy June evening. In a quaint suburb on the outskirts of Freiburg near Vauban – a flourishing, sustainable, district on the site of old army barracks.

But here, idling, at the intersection of ‘f@ck knows where?’ on the Swiss border with bumper to bumper traffic, trams both sides and no option to turn left or right, I thought, maybe, we were lost. “We” being me and compadre Daniela.

It was just under a day since we pootled into Freiburg, unloading ourselves into the home and good graces of friend Jörg Später, that we were now sprinting into Switzerland, navigating desperately to avoid the seriously expensive € autobahn charges. And stuck in a traffic jam on a bustling roundabout, at a very large intersection losing our well mapped way. Only forty minutes from our final destination Arlesheim, and the welcoming invite of hosts Tatyana and Thomas.

[crossing into Switzerland from Germany – before getting lost at the intersection of “f@ck knows where!?”]

Daniela, aka tour manager (one of her many hats), arranged the gig at Taverne Zum Vollmond, 24 June 2017 – a sofa concert, run by Thomas and Tatyana. A couple of  talented and respectively tech savvy and artistically inclined individuals who invited us into their home of orchards, windows of light, high ceilings, checked tiles and wooden floors. Treating circa thirty of us (plus newly roped in roadie, Jörg) to a Swiss apero of delicious home-made hors d’oeuvres, cheese, charcuterie and booze –  unexpectedly amazeballs – as the dial kept rising on this surprisingly sultry summer’s eve.

[Chives from Tatyana’s garden, warm up, apero and set up]

I warmed up with a few songs. It was hot!  I mean humid, muggy, hot!  This good-natured bunch were sweating sitting down while my fingers slid off strings. We took a break outside in the garden.

Different walks and ages, the crowd were a relaxed and friendly bunch. I kicked a football in the garden with one, he was very cool – liked my songs, evidenced by foot clapping while rolling on his back, he’s four?  Always plenty of talent in the audience and one, Marcus, treated us to a couple of songs after my set.

Their passions revealed in food, tech, friends and atmosphere Tatyana and Thomas are warm and generous, hosts – with an ethos that springs from valuing real connection, and community, and sharing what you have with others. This regular music event was inspired by a local woman they knew who opened her home every full moon to anyone who couldn’t sleep, or maybe just wanted a chat or company.

[About to start, Cooling off outside between sets, jamming with a couple of the guys after the gig, a well deserved cheeky one after a long day/drive]

Both a counsellor and artist Tatyana shared a fine catalogue of bold, surreal, dream inspired paintings, I’ll link to her website when it’s up. And Thomas the tech whizz was building a photography portfolio.  Inviting me and Daniela to a local village festival the following day (after making us breakfast! Totally spoiled) we caught a 10 piece jazz band before going off to Basel.

I mentally kick myself for missing the opportunity to float down the aqua currents of The Rhine, in PERFECT weather! What a gorgeous way to spend an hour. Can you believe we didn’t want to trudge back to the car to get our togs? Okay, we were zapped from the heat and a helluva lot of driving but still… Anyhow, we settled for walking along the river and watching others glide by in the fast moving current.

But hey, we made it to Arlesheim, Switzerland and Taverne Zum Vollmond.

Again, pics of the gig

Hi Allie, I'd like to hear about your latest news and events!

Make sure this account has posts available on instagram.com.